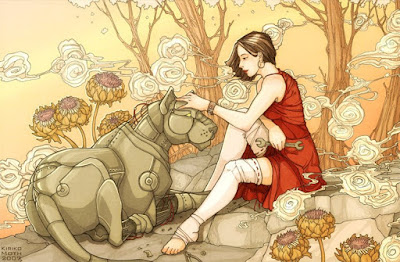 Artwork is from Kiriko-Moth and is called Rebuilding. Artist's Comments: I wanted to create a piece around the theme of strength, so I started with the iconic tarot image of a woman and a lion. But rather than taming or overpowering the lion, she's the lion's creator. The lion is also female, and represents her strength.

Its funny that the majority of my posts have been about the fix-ups we are doing on our house. In a sense, we are "rebuilding" those things we always hated about the house but never had the time or money to fix. It started with the bedrooms (3 out of 4 downstairs bedrooms are completed) and now the bathroom. But I had a real "ah hah" moment the other day when I talked to my sister, Lynn. She called after reading the blog post about my oldest daughter having a baby in the same year as my youngest daughter. She told me, "You are experiencing a "rebuilding" year." Let me explain what that means in our family.
My dad passed away in 1998. He was the first to go. After that we lost his sister-in-law, his twin brother, my sister and my mother. My husband lost his father and his aunt. Death was quick and thorough and left my sister and I clinging to one another, just the two of us, wondering who would be next.
It's been nearly a year since the last death. My kids are getting married and having kids of their own... finally! I thought they were going to wait until they were 40! But the nicest thing is, we are here, able to see the family bloom again, birth by birth, until once again our numbers will swell and Holidays will feel like they used to. This year, with two little ones coming, we are definitely experiencing a "Re-Building."
As I enter the New Year I feel truly blessed. 2009 stretches out in front of us like a blank journal just waiting to be written in. Happy New Year to all my family, near and far! I hope it holds lots of fun, promise, prosperity and happiness for you all! Thanks for taking the time to stop by and read my ramblings.