Today's recipe comes from the Simply Recipes website. The crust will be made in a tart pan this time, a Pate Brisee crust, and blind baked before filling it using this Quiche recipe.

It also is giving us a chance to cook our bacon using the oven method. Have you heard of this? It's supposed to make the easiest, most perfect bacon EVER! 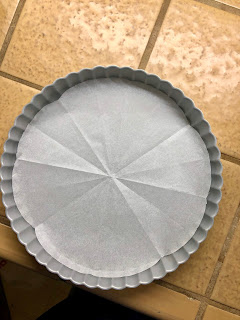 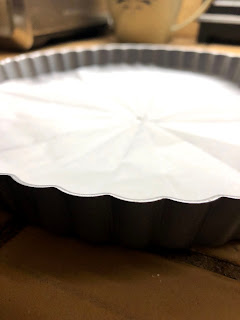 The recipe begins with lining a tart pan. I used parchment rounds for this and tried to downsize them just a bit. Notice the flowery petal shapes... but it did work! I sprayed the parchment with a bit of non-stick spray. This is blind baking the pie crust. I took my wonderful crust out of the refrigerator for about 15 min. before I was ready to roll it out. Have you ever used a pastry mat? They are great! I've had this one for so many years I don't even know where I bought it at. Put down a little All-Purpose flour, then the crust dough and then a bit more flour sprinkled on top of that. 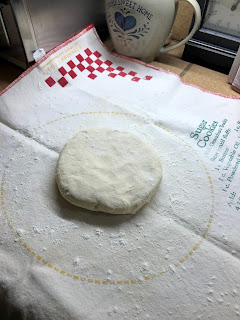 This crust rolled out so EASY!! What a great recipe! Nice and smooth while still being elastic! It was quick and easy to roll out. I made this crust in my food processor using the Pate Brisee recipe above. 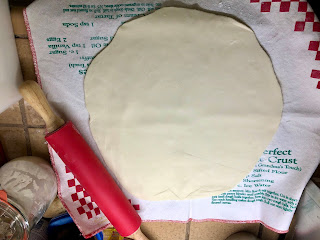 Next comes the filling process. Bacon was cooked in the oven, rested on a paper towel to remove the grease and trimmed into pieces the width of the bacon by about 1/3 of an inch. 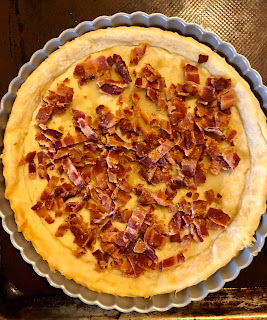 Next, I put on a layer of shredded cheese, a few green onions and a bit of smokey ham. And finally, the egg/cream/milk liquid that included salt, pepper and some dried chives along with a sprinkle of nutmeg. 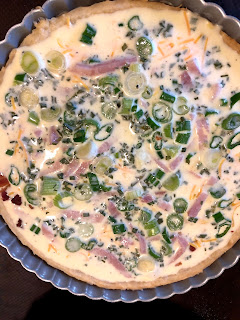 That's when I had just a bit of a problem. Even though I blind baked the crust with pie beads in the bottom, my crust shrunk up a bit and possibly developed holes around the removable tin piece. It didn't leak much, but it did leak and I was glad I had a Silpat mat under it that could be easily cleaned. 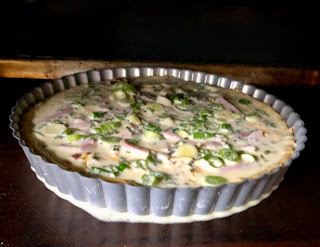 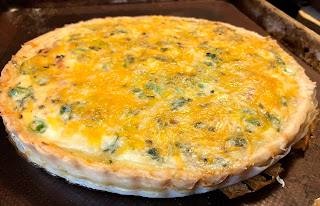 We had the quiche with a hash brown patty that we heated using the toaster. No that wasn't the recommended cooking method but it worked. And we put a little cinnamon applesauce on the side. You guys!! Delicious and easy!

And there you have it. Pie week 3, a savory Quiche Lorraine.

Pie crusts were the most difficult thing for me to make before setting myself this challenge. Week 3 and I can already tell a difference. They are really getting flaky and very easy to roll out. I loved this week's crust and can't wait for next week's pie!! I don't know yet what it will be but I'm really looking forward to making another pie. 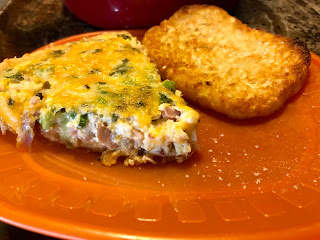