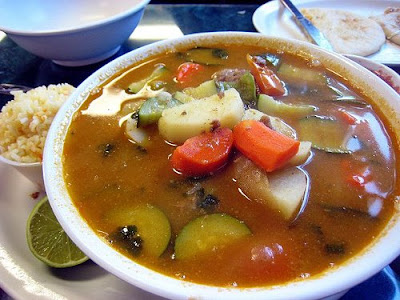 We had dinner out last night at Pancho's Restaurant in San Luis Obispo. I've been wanting Tamales lately, probably because Tamales are traditionally made around the Holidays. Anyway, we walked into the Restaurant and there on the Daily Special Board was "Albondigas Soup with Tortillas." Over in my "100 Things About Me" post, you'll see that I could eat soup for every meal. I went back and forth in my mind; tamales or soup, soup or tamales? When the waiter came over I decided... Albondigas Soup. Am I ever happy I did! It was a cold evening and I have been feeling like a cold was coming on for about 3 days. This soup came brimming hot and filled to the rim with traditional meatballs and large pieces of potato, carrot, zucchini, celery & onion. There is no way I could EVER tell you just how good this soup was! The waiter came over and I told him this is the BEST Albondigas soup I have ever had! He said they keep this soup as a "Special" in his restaurant rather than a regular menu item. I told him this soup was indeed "Very Special". That's when he said it, "It's my Mom's recipe". Well, that explains everything! It wasn't just a soup made of broth, meat, vegetables and herbs. This was a soup that had been made with love and tradition as well. There is just something about making and eating things made by mom. Did your Mom have a special recipe that was all hers? Something you would just love to be able to go home and sit at her table and eat? I do.
My mom had an old yellowed recipe book that used to be her mother's. One of my favorite things she made was Sauerbraten. She would carefully open the recipe book to the correct page and start gathering ingredients together. I watched her make it several times but to this day, I don't know all that went into it. I remember onions and vinegar although the final dish didn't taste like either of those things. She would put it all together and let it marinate for a few hours then pop it in the oven and let it cook for a couple of hours on a really low heat. The meat was really tender and flavorful when it came to the table. Gravy was made from the drippings and was served over the meat and on top of mashed potatoes. Tiny baby carrots usually completed the meal. I'm sure it was made with love and that contributed to it's natural goodness. What recipe would you you proudly proclaim, "It's My Mom's Recipe"?

July 10, 2009
Ok, you probably thought I fell off the face of the earth right? Nope, there is just alot happening around here. The next event is Beckie's Baby Shower this Sunday. Decided to make my very first Diaper Cake and these are just a few of the pictures.

The first thing I did was watch about 20 YouTube videos describing how to do it. Then I bought my supplies and put it together roughly first then more refined about a day later. This is a close up of the baby sock roses with mitten leaves. Yes, that video DOES exist!

Next is a close up of wrist rattles and a little caterpiller radio that makes soothing sounds for baby. Background ribbon is from WalMart and the blanket set is from the Jungle Adventure Collection at K-mart.


The topper for our "Jungle" themed cake is a Silver Back Ganz Gorilla.


These little links slipped easily over the ribbon and added a little extra bling to the sides of the cake.

Wednesday night is Date Night at our house. It's been that way for a LONG time! And we didn't want retirement to do away with our weekly fun. So today, I'm going to cover some good ways to keep that fun coming and be able to pay for it with slightly reduced funds.
Put some money in the budget. Analyze what you can afford and how many times you will be going out during the month. If you get paid twice a month, budget for two date nights. If you get paid weekly, you only need to budget it in for the week. For us, we are getting paid once a month so we will budget for 4 to 5 nights out. We set aside about $20 to $25 per week for date nightRemember, it's about spending time together not how fancy the dining is. You can make a picnic one week and then spend double the following week at a nice place. You can make dinner at home and go to see a play or movie. In our case we could go to the beach with some hot dogs, potato chips a…
Post a Comment
Read more

October 05, 2018
A few of you have been asking about the recipe for Sourdough Bread that I use and I figured this would be the easiest way to give it out. This recipe makes 2 loaves.

Mix the starter, water, milk (or the substitute) together thoroughly. Then add in the salt and flour.
Put the dough in a covered container and let it ferment at room temperature.
After 2 hours fold the dough. How To Fold The Dough
After an additional 2 hours, fold the dough again.
When the dough is is finished fermenting (after a total of 5-6 hours - when dough is bubbly, soft and will pull a windowpane) divide dough into two pieces around 855 g. each.
Do a first shaping of the dough and let r…
Post a Comment
Read more